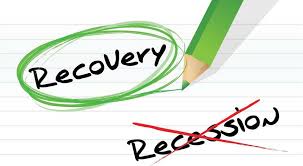 That is it . . . I am fed up and can’t stop myself from saying something that has been on my mind for a little while now. Can non-profit organizations please stop running around and telling anyone who will listen that the economy is bad and the recession is hurting their agency?
I hear my non-profit friends (both staff and board volunteers) bemoaning how bad it is and how they’ve been impacted. I know that I’ve heard it at least once a month going back to the 2008 stock market meltdown, which by the way was FIVE YEARS ago.
I totally understand why people were talking about this 12 to 24 months removed from the epicenter, but as I just pointed out more than half-of-a-decade has passed since that time.
The fact of the matter is the recession officially ended in June 2009, according to Cycle Dating Committee of the National Bureau of Economic Research. Don’t believe me? Just go ask Google.
In fact, the Blackbaud Index just arrived in my email inbox, and they are estimating that charitable giving rose 4.9% in 2013. Additionally, online giving increased by approximately by 13.5%.
When I see numbers like these, it always stirs my emotions when juxtaposed against comments such as:

Believe it or not, I heard some variation of each of these comments just this last weekend!
At first, I found myself shaking my head and asking the obvious question, “WHY?” However, I quickly stopped that when I realized that I know the reasons why. Here is what I think drives those comments:

Regardless of whether or not you believe these reasons, the reality is that we need to shake ourselves out of this mindset. Our clients deserve better and whining has never been shown to solve problems.
So, what should you do to combat this mindset? I suggest the following:

What are you doing to combat this insidious, self-defeating mindset that is still pervasive in many non-profit boardrooms? Please use the comment box below to share your thoughts and experiences. We can learn from each other.
On a side note, before you take me to task with comments about my insensitivity, please know that I know there are people out there who are still hurting. I have never said there weren’t. In fact, I know some of those people, and I am sure you do, too. However, the reality is that non-profits cannot wait until there is no more unemployment. Our agencies cannot wait until economic indicators are back to the ridiculous 1990s levels. Those who wait for that to occur won’t be in business for much longer. Let’s rediscover that often-celebrated “American spirit” of picking ourselves off the ground and doing the hard work to get our agencies moving again.
There! I’ve said it . . . now please feel free to excoriate me.  🙂
Here’s to your health!
Erik Anderson
Founder & President, The Healthy Non-Profit LLC
www.thehealthynonprofit.com
erik@thehealthynonprofit.com
http://twitter.com/#!/eanderson847
http://www.facebook.com/eanderson847
http://www.linkedin.com/in/erikanderson847