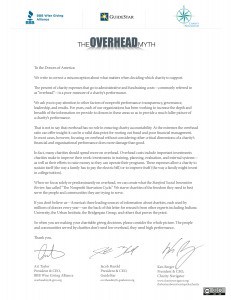 It wasn’t even a year ago when the CEOs of BBB Wise Giving Alliance, Guidestar and Charity Navigator all signed a letter encouraging donors to stop looking at the concept of “overhead” to determine the effectiveness and efficiency of non-profit organizations. This letter was the culmination of many efforts and lots of voices including Dan Pallotta, who is the author of “Uncharitable”. Bloggers and non-profit professional everywhere heralded this as a campaign that will put an end to what is commonly referred to a “The Overhead Myth“.
Over the years, I have written a number of blogs on this subject including:

“I personally don’t think anything is going to change as a result of this “overhead myth” campaign push.  I think donors are set in their ways. I believe Dan Pallotta was right about the Puritan influence on our culture. I don’t think “culture” and “values” and “habits” are easy to change. AND I think talk is cheap.”

As you can imagine, I was roundly criticized for being a “negative, glass-half-empty” kind of person. That’s OK . . . I have thick skin.
Besides, I knew I was right which always goes a long way when it comes to swallowing criticism.  😉

As they say, the proof is in the pudding which is what inspired today’s blog post. The pudding, of course, is an article that washed into my email inbox from LinkedIn on November 30, 2013. The author was John Wasik and the article was titled “Digging Into Non-Profit Finances: Four Things To Check“.

In his post, Wasik talked about illegitimate non-profit organizations and the lack of real oversight for our sector. He shared four tips with readers/donors on what they should look for before making a charitable contribution.
Yep . . . you guessed it. He points to the classic definition of “overhead“. Here is what he said:

“What percentage of the non-profit’s income went towards it mission? This is also a key red flag. This percentage is also known as ‘the overhead ratio,’ which tells you how much was spend on non-program expenses such as fundraising and administration. A fairly well-run non-profit will spend at least 80% on its mission.”

The truth of the matter is that this morning’s blog post isn’t really a victory lap or an “I told you so…” article. The reality is that I am annoyed at my fellow non-profit professionals.
Did we really think that an open letter to the world was going to suddenly change everything?
I certainly hope not!
As I said back in June, “I don’t think “culture” and “values” and “habits” are easy to change. AND I think talk is cheap.”
All of this leads me to wonder . . . what have you been doing on the front line to educate your donors and bring an end to “the overhead myth“?
Ohhhhhhhhh . . . you don’t know what to do about it? Well, here are a few suggestions to get your creative juices flowing:

OK . . . I got the ball rolling for you. Please scroll the down and use the comment box below to share additional ideas with your fellow non-profit professionals.
Not only can we learn from each other, but we can also inspire each other to solve bigger problems together. Please take 30 seconds out of your busy day to share one idea. Please?
Here’s to your health!
Erik Anderson
Founder & President, The Healthy Non-Profit LLC
www.thehealthynonprofit.com
erik@thehealthynonprofit.com
http://twitter.com/#!/eanderson847
http://www.facebook.com/eanderson847
http://www.linkedin.com/in/erikanderson847