By John Greco
Originally published on June 14, 2012
Re-posted with permission from johnponders blog

If you cry “Forward!” you must make clear the direction in which to go.  Don’t you see that if you fail to do that and simply call out the word to a monk and a revolutionary, they will go in precisely the opposite directions.
— Anton Chekov, Russian dramatist

To make sense of this quote, we need to understand monks and revolutionaries.
I imagine what Chekov had in mind when citing a monk is someone who lives within an established routine, with not a lot of change or variance, and with a reverence for the past.  I enhance that image further by thinking that monks have so much reverence for the past that they keep it alive in the present.

I imagine what Chekov had in mind when referencing a revolutionary is very different — strong intention, with strong action, to break from the current status quo, and create something radically new.  I enhance that image further by thinking that revolutionaries have such an appetite for immediate change that they want to pull the future into the present.
Forward, to a monk, means no change is necessary nor anticipated.
Forward, to a revolutonary, means change is assumed and must happen NOW!
It is easy to see, then, that “forward” to a monk might mean committing to a strict adherence to the practices and traditions of the past.  And to a revolutionary, ”forward” might mean the accelerated establishment of new and different policies and practices, NOW!
There is likely a monk-like colleague and a revolutionary-like colleague sitting to the left and right of you.  Same, sitting on either side of each of them.
And which way do you lean?
The implications for leaders are considerable.
We need to be explicit with plans and strategies and visions.   What is changing?  What isn’t changing?  We might see ways to bridge the gap; we can speak to how planned changes actually honor the past (which will get the attention of the monks) while speaking to the promise of changes in short order (which will pique the interest of the revolutionaries). 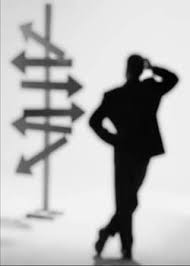 Just think of what this means vis-à-vis mixed generational workforces.  And vis-à-vis rapid technological advancement.  And social change.
Oh boy!
So; not unlike the high-wire act of change, calibrating and recalibrating the messaging is important; if the monks have inordinate influence, marginalization, irrelevance, and extinction are real risks.  If revolutionaries hold sway, chaos and confusion disable.
In either scenario, there is not progress.
There is no forward.